Paxton got a new wagon so he could go on adventures without having to walk. We took him to an art festival in Juno Beach, Florida and we was SO good.

He never tried to jump out and was very accepting to people petting him.

Of course, I rewarded him with treats (apple and carrot slices).

Here’s what went down:

4: people who asked if we were going to fatten him up and eat him (rude!)

3: people who forced their dog on Pax without asking — he snapped at two which was his right to

1: person who dumped popcorn in Paxton’s wagon (he sorta asked so it was OK)

2: People who asked if we were getting Paxton beer (no, pigs can’t have beer)

1: kid who tried to hitch a ride on our wagon

40: people who asked to take photos

40ish: People who did not ask and just took photos (no big deal but I appreciate people asking)

60ish: people who did not ask to pet Paxton (again, not a big deal but it’s nice when people ask!)

3: drinks mom and dad each had to manage the anxiety of so many people! 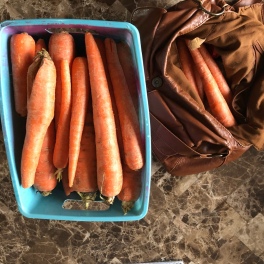 40: carrots some random art seller gave us because he was going to just throw them all away

200: People we educated about pigs which makes EVERY SINGLE BIT OF THIS WORTH IT!

One thought on “By the numbers: Pax at the art fest”

Talk to me! Cancel reply

By an odd turn of events, I adopted a potbellied pig in March 2017. I named him Paxton, quickly learned how amazing this animal was and decided to give up eating meat.

This is my journey to living a plant-based life.

Read more in my “about me” section.

There was an error retrieving images from Instagram. An attempt will be remade in a few minutes.