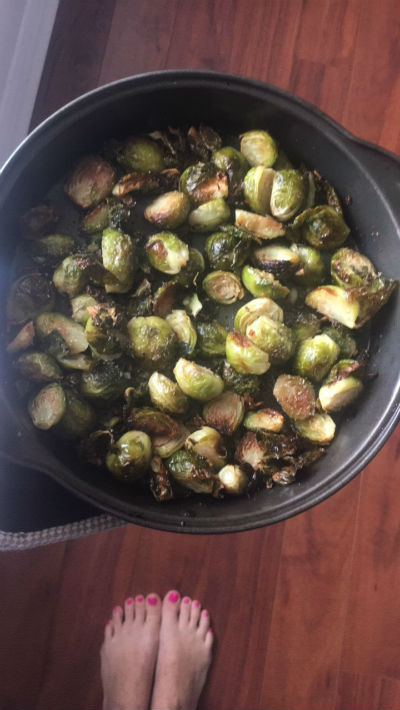 No, I didn’t just wake up one day and think this was a good idea. I’m a lifelong meat eater and long story short, I adopted a potbellied pig which pushed me to dig my head out of the sand and educate myself on the truth about the meat and dairy industries and the crap I was consuming every day.. Read more about me.

Day 1: I’m excited for the change, in a way it feels like freedom, from what? I’m not sure yet.

I spent my morning flipping through the Thug Kitchen cookbook which is effing amazing.

I went to Pei Wei for lunch only because I had a 2 for $10 coupon (and I don’t know what to feed myself). I was pleasantly surprised by its vegetarian menu. I chose one veggie only and one tofu dish. I don’t have much experience with tofu but I actually liked this dish.

(Later that day) Well crap, my boyfriend surprised me with dinner … chicken …  so I guess I’m actually starting tomorrow, Aug. 11, 2017.

Michael and I had not had a chance to sit down and talk about my new venture so he didn’t know I had quit meat. He’s been out of town, the decision for me just clicked one day …

I told my plans and reasons why over a glass of wine (update, I’ve learned a lot of wine and beer is made with animal products). To my surprise, my meat-and-potatoes boyfriend was very supportive and when I asked (half joking) if he wanted to join me, he said yes!

Day 4: I thought I was getting sick or was having a 3-day hangover. No, I’m detoxing from meat. Because apparently that’s a thing.

My body feels good today and I’m still 100 percent happy with my decision to quit meat. I’ve also cut back drastically on dairy.

Current listen: Vegan Warrior Princesses Attack  and this episode is great: Get your hands off my v-card.

Day 12: I feel pretty good still — though my intake of tortilla chips has increased significantly. I don’t really feel like I’m missing out on meat like a thought I would.

I am struggling to keep my protein intake high, a girl can only eat so many hemp seeds.

My boyfriend, who so graciously decided to do this with, me had a slight meltdown in bed the other night when he realized he couldn’t eat lasagna or his famous wedding soup on Christmas Eve. I talked him off the edge, don’t worry.

Current read: I’m mad as hell and I’m not going to eat it anymore.

Day 15: I lied, I’m not over the hump. apparently you can detox for a long time.

Day 23: We are still eating eggs typically two days a week. Mostly because I want Michael to make breakfast every weekend.

[More: I have a pig, his name is Paxton James]

Day 28: There’s a major hurricane baring down on the entire state of Florida. I have entirely too much produce for two people so I’m letting Paxton (my pig) help me eat everything so it won’t go bad. I still miss chicken wings.

Also, pretty sure I accidentally ate bacon hidden in pasta salad in a drunk stupor. UGH, 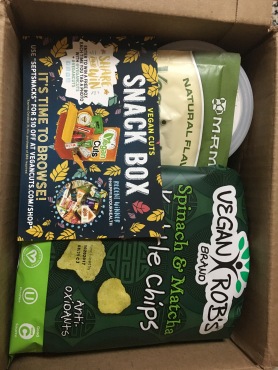 Day 30: I feel great! I haven’t had any withdrawal symptoms in a while. and I don’t really miss meat. Every now and then I do want some damn fried chicken.

I’m starting to pay more attention to what I am eating instead of what I’m not. We’ve explored a few recipes and discovered I can make a pretty good vegan tostada. Michael had cheese but hey, at least he’s still not eating meat!

I ordered a snack box from Vegan Cuts so I can find new things to eat (with little effort, let’s be honest). I totally recommend this! Michael whipped out his vegan chips at the sandbar and shared them with Paxton HA!

I also found a local organic co-op that deliverers fresh produce every week. This has made life easier but also forced me to figure out what the eff to do with rutabaga. 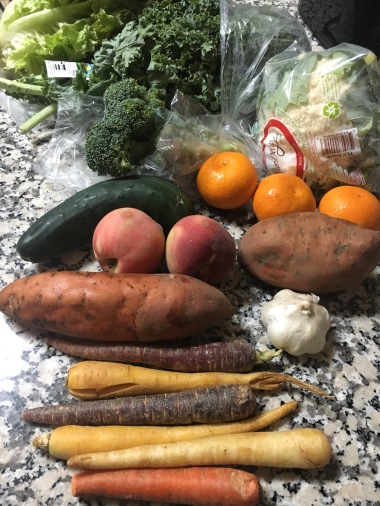 Weekly produce delivery. I put a cooler on the patio and come home to fresh, organic produce! 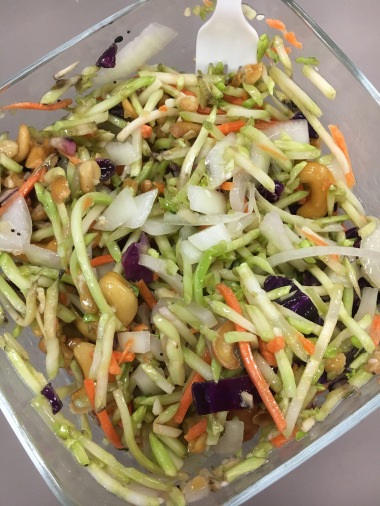 Day 36: We went out to a bar with friends to watching some boxing match I don’t give a crap about. Michael’s friend ordered wings. That was hard.

He had flatbread pizza and I had fried mushrooms. Definitely not vegan but my goal for this six weeks was to avoid meat.

Day 37: Michael wanted to go to the bar to watch football. I didn’t want to be surrounded by dancing chicken wings so I offered to make snacks we could eat. Guacamole and vegan chili! 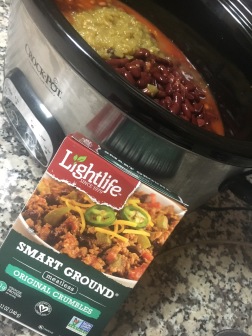 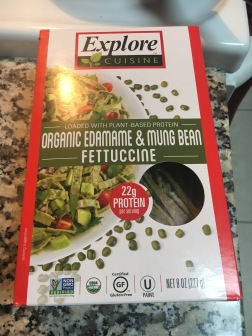 I need to stop eating so many white carbs. This “pasta” is amazing and has a ton of protein 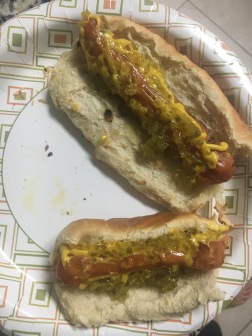 We tried some new stuff this week like vegan hot dogs which Michael picked out, cooked and actually enjoyed. I’ve created a monster. A big vegetarian one.

We’ve also tried vegan sausage and have used it in several recipes.

Day 41: My organic produce co-op delivery service went under. A big corporation who doesn’t give a crap about small businesses is to blame. Welcome to 2017.

In other news, for the past week my meals have been almost completely vegan. I swapped out butter and cheese for vegan versions for both.

I could eat vegan butter with a spoon.

Tomorrow will be six weeks. How did that happen and who have I become?

Day 42: With a lot of planning, label reading and wine drinking I did it. I haven’t had meat for six weeks (except for that drunken slip up).

I’ve learned so many food have animal products in them. Like tater tots (are we for real?) And I bought those stupid candy corn pumpkins the other day, yeah those too.

I’m still learning to live without chicken wings and watching my body change with the increase of veggies in my life. I’m also learning how to balance my diet and not over do it on the tortilla chips. Restaurants are still hard but I will say my friends and family have been unbelievably supportive. My friend even made vegan jello shots for me!

I have no more 3 p.m slump. My energy is up and my cravings are less severe. My skin seems to have cleared and I’m beginning to change the way I think about food (this might be the hardest).

This journey has just begun. I’ve got a lot of learning and exploring left to do.

And I have Paxton to thank. That little (now 45 pounds) guy has changed my life. 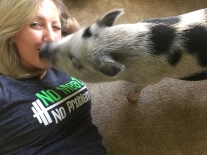 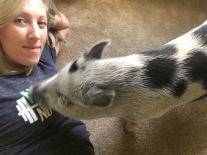 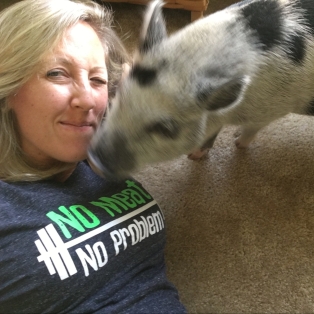 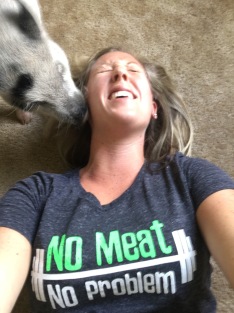 9 thoughts on “I quit meat for 6 weeks, this is what happened”

Talk to me! Cancel reply

By an odd turn of events, I adopted a potbellied pig in March 2017. I named him Paxton, quickly learned how amazing this animal was and decided to give up eating meat.

This is my journey to living a plant-based life.

Read more in my “about me” section.

There was an error retrieving images from Instagram. An attempt will be remade in a few minutes.